The history of Swiss birdradar

A brief history of the development of dedicated bird radar in Switzerland since the late 1960-ies aims to emphasize careful consideration of the limitations and possibilities of radar in ornithological research. The long-term Swiss development forms a solid basis for the integration of new radars for target-oriented adaptations and applications. 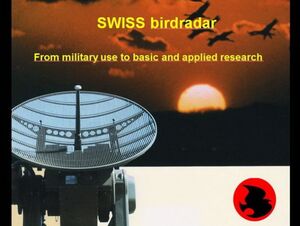 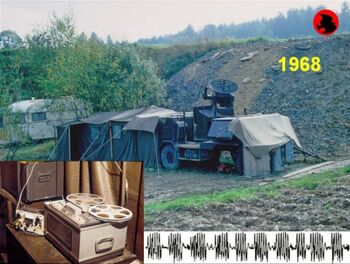 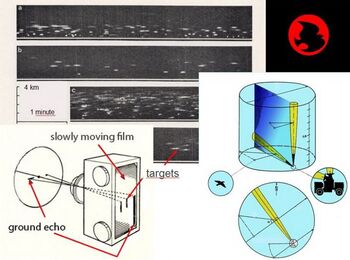 Migratory passage was quantified with a vertical beam and an additional low-elevation measurement (perpendicular to the principal direction of migration). The echoes appearing above the STC-threshold on the R-scope were first voice-recorded on tape. Later we used a continuously moving film to register the Z-modulated R-scope, the film strips showing 4 km range on the y-axis, and time on the x-axis: a) vertical beam high density migration, b) low density, c) low-elevation high density, d) small window with low density (Bruderer 1971).

Photo-recording of the vertically scanning radar beam on the range-height indicator increased the surveyed space for quantification of migratory passage, but a rough data-analysis showed severe limitations of the method (Bruderer 1980). This prevented further use of the method (but did not prevent its use for recent ship radar studies). – Semi-digital recording of flight path by multiplex-pulse-length modulation of coordinates, the digitized signals transferred to a computer (Bloch & Bruderer 1981). – Improved echo-signature interpretation by recording tracks and echo-signatures of identified birds on video and audio track of video camera. Increasing the number of know wing-beat pattern by releasing birds by day and night into the radar beam (Bruderer et al. 1972, Bruderer & Neusser 1982). 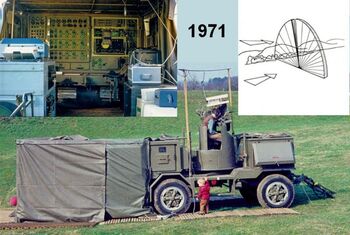 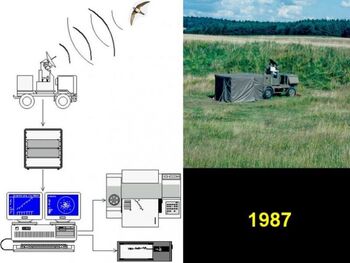 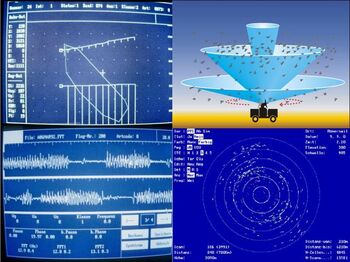 Radar studies in and around the Alps (Bruderer 1996), characterized by the combination of methods (Bruderer & Jenni 1990), and by the implementation of mini- and microcomputers. Studies with several radars in the approach area of the Alps (1987) with fully digitized system for recording of flight-paths, echo-signatures and the number of birds in conically scanning radar beam; flight-paths and echo-signatures simultaneously registered on traditional plotters as back-up (Bruderer et al. 1995).

Conical scanning at several angles was chosen as the standard method to measure the number and distribution of birds in a half-sphere of 6 km radius around the radar. Migration traffic rate (MTR) was obtained by multiplying the density (birds/km3) by the average ground-speed. Bruderer et al. (1995) demonstrated quantitatively the effect and compensation possibilities in detection probability with distance, elevation angle, and aspect. 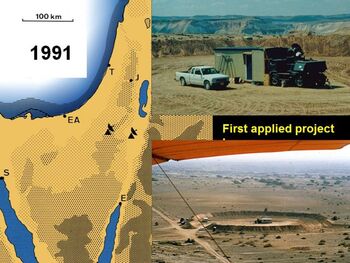 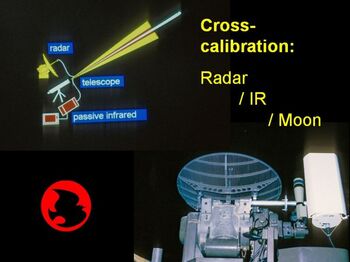 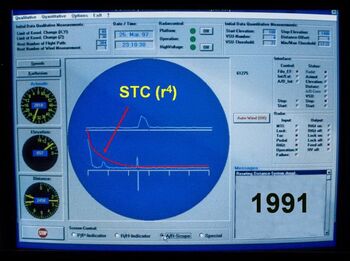 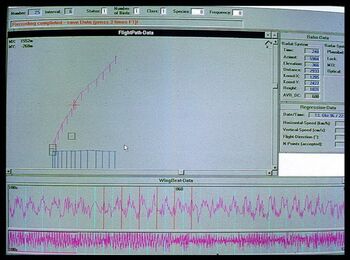 Radar studies in the eastern and western Mediterranean, including the first applied project, an environmental impact study for a planned antenna array of Voice of America in southern Israel (Bruderer 1999, Bruderer et al. 2000). Note the ideally constructed dams to protect the radar against ground clutter. Usually natural hollows served as radar locations (see corresponding images and publications mentioned above).

Cross-calibration of three counting systems (radar/passive infrared/moon-watching) allowed defining the effective beam-width of the radar as well as the silhouette size of birds at various ranges in the two optical systems (Liechti et al. 1995).

Quantification profited from the introduction of a mathematically exact STC to compensate for the R4-law up to 3 km range. The radar instruments for the three polar coordinates as well as the A- and R-scope presented real-time on the computer together with buttons allowing optimal target assessment and acquisition.

Presentation of electronically recorded flight-paths and echo-signatures brought to perfection (Bruderer et al. 2000). Note the projection of the track into the vertical and horizontal plane, and the wing-beat pattern on two time scales.1

Studies on bird migration across the Sahara. While two fixed radar stations were used in the conventional way, new mobile radar was constructed to drive far into the desert. At the cost of lost tracking and scanning capability the weight of this mobile radar was reduced to less than one ton and the power consumption to 1 kW, the whole array together with the fully computerized and automatized recording system mounted on a 7-t truck. This radar system was the basis for all the following applications integrating marine radars with dish-antennas.

The MobiRad was one of the reasons to revive the old fixed-beam method. The other reason was to reach altitudes of 7.5 instead of 5 km with a fixed beam and improved receiver to cope with potential high flights above the desert. At the fixed radar stations (at the Mauritanian coast and next to an oasis 500 km inland) conical scanning and fixed-beam methods were used in parallel with tracking.

By digitally recording the intensity-variation of passing birds we obtain not only the temporal and vertical distribution of the targets (as with the photographic recording in 1968-1970), but additionally their individual echo-signatures, and all this in a form apt for electronic analysis (Schmaljohann et al. 2008). 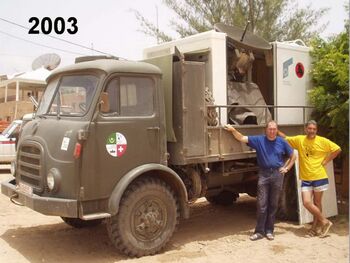 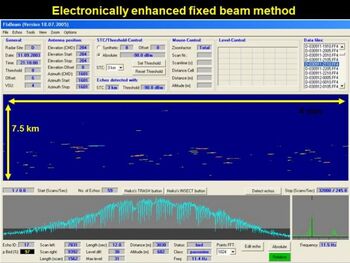 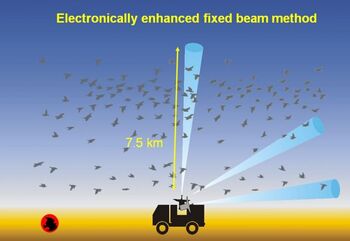 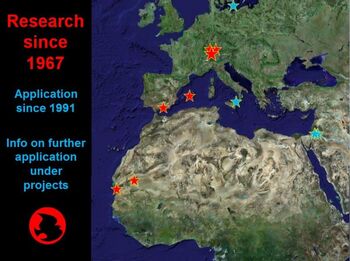 The radars as well as considerable technical support were initially provided by Oerlikon-Contraves AG; later we obtained the radars on loan and eventually as a gift from the Swiss Army. The whole research formed part of the tasks of the Swiss Ornithological Institute, who invested millions of Swiss Francs in its migration department. From the beginning, most of the scientific projects were supported by the Swiss National Science Foundation, the Sahara project additionally by the Foundations Volkart, Vontobel, MAVA for Nature Protection, Ernst Göhner, Felis and Syngenta, the companies Bank Sarasin, Helvetia Patria Insurances and F. Hoffmann-La Roche AG, the European Science Foundation as well as BirdLife Switzerland and International. The first applied project was completely financed by the Israel Ministry of Communication. One of the recent applied projects, leading to the first operational individual of marine radar with a steerable pencil beam was supported by German Federal Ministry for the Environment.

A detailed reference list can be found in the attached pdf-files of publications on the history of the “Superfledermaus” (Bruderer 2007). More general papers on radar ornithology (Bruderer 1997a,b and Bruderer 2003) are also attached.

Adapting a military tracking radar for ornithilogical research – The case of the “Superfledermaus” (288.7 KiB)

The Study of Bird Migration by Radar, Part 1: The Technical Basis (1.2 MiB)

Would you like to know more about Swiss birdradar?

Read about the company today by clicking on the button below.

more about Swiss birdradar
We use cookies on our website to give you the most relevant experience by remembering your preferences and repeat visits. By clicking “Accept All”, you consent to the use of ALL the cookies. However, you may visit "Cookie Settings" to provide a controlled consent.
Cookie SettingsAccept All
Manage consent

This website uses cookies to improve your experience while you navigate through the website. Out of these, the cookies that are categorized as necessary are stored on your browser as they are essential for the working of basic functionalities of the website. We also use third-party cookies that help us analyze and understand how you use this website. These cookies will be stored in your browser only with your consent. You also have the option to opt-out of these cookies. But opting out of some of these cookies may affect your browsing experience.
Necessary Always Enabled
Necessary cookies are absolutely essential for the website to function properly. These cookies ensure basic functionalities and security features of the website, anonymously.
Functional
Functional cookies help to perform certain functionalities like sharing the content of the website on social media platforms, collect feedbacks, and other third-party features.
Performance
Performance cookies are used to understand and analyze the key performance indexes of the website which helps in delivering a better user experience for the visitors.
Analytics
Analytical cookies are used to understand how visitors interact with the website. These cookies help provide information on metrics the number of visitors, bounce rate, traffic source, etc.
Advertisement
Advertisement cookies are used to provide visitors with relevant ads and marketing campaigns. These cookies track visitors across websites and collect information to provide customized ads.
Others
Other uncategorized cookies are those that are being analyzed and have not been classified into a category as yet.
SAVE & ACCEPT